Lego® produced a delightfully detailed set of games that are must haves for any Lego® and RPG fan: Heroica™.  There were five sets to choose from featuring “elements” from forests, castles and dungeons that can be arranged in meandering paths of danger and loot.

Predictably, Lego® was compelled to make a set of rules for the game that could be learned in five minutes by an eight-year old and result in a fun twenty-minute romp into a goblin-filled castle.

I wanted to play a micro Rogue-like.  I could have developed a more complicated rule system – but D&D and similar products already exist if I just want to substitute the Lego® models.  I’m aiming for something still relatively quick to play with a bit more challenge and some RPG trappings.

Odyssey is a cooperative adventure game that can be played with any number of players.

Aim of the Game

For myself, with my roots in D&D, the goal is to get out alive – so returning to the start is the ultimate goal.  Moreover, “leaving” the castle/dungeon to recover health should not be a mark of failure.  A challenging game ought to force the players to backtrack out several times.  The bigger the Odyssey, the more times the players should need to step back and regroup.  That said, each Odyssey should have a prize buried at the farthest point from the start – and if the players want to end the game after defeating the nearby Monsters, so be it. 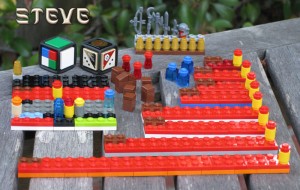 Like the original game, it is probably good to start with the map ideas offered by the good folks from Lego®, and then supplement as needed.

I felt the need for three times as many Treasure Chests, Life Potions, and blue Mana Potions (replacing the Speed Potion).  (Luck Potions being rare seemed fine to me.  The Strength Potion became a rare Attack Bonus.)

The game will need a “natural” six-sided die, otherwise known as a “d6” (die with six sides).  I borrowed the die from Lego® Robo-Champ™ and assigned number values to the colors.  If you are doing this you may want to consider that the numbers on the opposite sides of the die add up to seven on a “natural” six-sided die.  (There is a variant option here for the folks who have a d8 [an eight-sided die] burning a hole in their pocket.)

The Heroica™ die is interesting.  There are three skulls on it allowing for a d2 roll (“heads” or not-heads), however, I find it simpler to flip a dedicated coin for d2 rolls.  Count the Shield as a one and you also have 1:3 odds and random 1, 2 or 3 noted as d3.  A number in front of the “d” indicates the number of times that die needs to be thrown.  Example: 3d3 would mean to throw the Heroica™ die three times and add up the rolls resulting in a random number between 3 and 9.

Lastly, to keep track of the significantly more complicated combat/action system, each Hero and Monster character in the game will need stat tracking plates.  And it totally makes sense to build these out of Lego®. 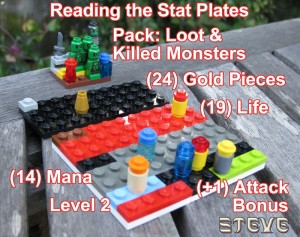 Each Hero will need his own set of Stat Tracking plates.  The different color piece in the upper left corner represents the start or the lowest number on the plate.  The Gold counter doubles as an Experience counter and the Heroes go up a Level every 20 Gold.  If your Hero has more than 40 Gold, then the Hero has reached Level 3 and start from the top of the black plate again. There is a maximum of 30 Life and 30 Mana.  Each Hero type has a unique Start value for the Life and Mana.  When a Hero returns back at the start point, then their Life and Mana get restored to the Start values.

The short Green and Red strips are positive and negative bonuses and the two-piece tokens are the counters.  I include bonuses for Mana when receiving, Gold when finding, Life when Healing, and Life when being Attacked.  It is okay to stack bonus indicators that share the same number on top of each other.  For my bonus indicators, I use colors that are similar or identical to the indicators on the other plates to make it easier to remember what the bonus is for.  For example, I would use a Gold cone as an indicator for the Rogue.  (So the yellow with a red stud on it is a Life counter: One is used both in on the Life plate and another on the bonus strips.  The clear blue is a mana counter.  The gray with a yellow stud is a weapon bonus.)  I leave unused indicators in the between black area for my convenience. 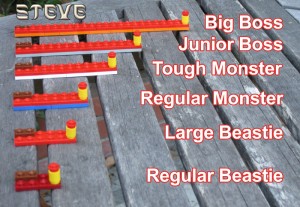 There is a two-stud (or one-stud) contrasting color plate in one corner of each large plate.  This identifies the “one” or final counting stud for the plate, so the orientation of the plate is always clear.

You only need enough Monster plates for a single battle, so two of each of the lower number plates should be enough.  And because only Life Points are being tracked for the Monsters, the color doesn’t really matter.  Mixing colors is fine – as long as you can easily identify the last one (or two) studs in one corner.