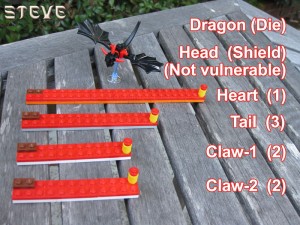 It just wouldn’t quite be a complete dungeon crawl if there wasn’t an option to fight a dragon.  So if you have the Lego® Lava Dragon™ or a similar creation of your own, here’s a set of combat rules for a proper drag out fight with a dragon.

Firstly, dragons need space, so a 3 x 3 space room is probably your minimum.  Second, your dragon is going to have four Life plates:

Dragons are able to multi-task, so any Hero is vulnerable on during their Action Phase.  Roll the Heroica die to see what part of the dragon your Hero is bumping up against – and what kind of damage the dragon is hitting back.

The dragon has two Claws, so defeat one and then continue to attack the second to defeat both of them.  Defeated Tail and Claws have the Range and Damage of the Heart: Range 1 and Damage to Hero is 1d3.

Dragons will not sit and wait while being hit from a distance by a Wizard or Ranger.  They can move up to three spaces during any Move Phase to close the gap with a pesky Hero.

Dragons should have a respectable hoard.  Make an extra large chest and pile some gold nearby.  After defeating a dragon, reward the Heroes with

(Although, defeating the dragon ought to be a reward in itself.)

To “flee” from a dragon, expect to need to get more than eight spaces from the nearest piece of the dragon’s hoard.

If you leave a dungeon to recuperate Life and then return to fight the dragon again, restore at least half damage to the dragon’s various Life Plates.